Circuit of Great Cockup to Binsey in the Northern Fells (24km)

After the lost GPS disaster on Skiddaw last week, I replaced it with another Garmin unit, the Vista HCx. I bought it from Handtec for 130, which was 20 cheaper than Amazon, and about the same price that most online shops are selling the Legend HCx. Great service from Handtec - will definitely be using them again. The advantage of the Vista is mainly the inclusion of an electronic compass and a barometric altimeter. Still playing around with the unit, definitely an improvement on my old Venture Cx. 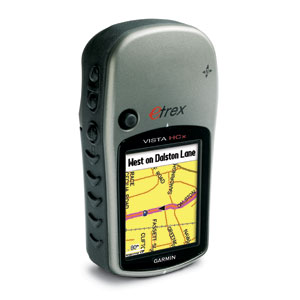 I also wanted to make better use of the recorded GPS tracklog, using it to automatically geo-tag the photographs I took en route. See previous post about that! Photos, suitably geo-tagged, are in this Picassa Album.

This was my fourth visit to the Northern Fells, and I think it’s going to take at least one (and possibly two) more walks to complete the 24 summits in Wainwrights Northern Fells guide. I may have felt slightly less enthusiastic than I should about this north westerly region, the highest summit being Great Sca Fell, and this is only 2136’. Driving in along the A66, seeing fantastic clear views across Blencathra, I was tempted to divert. It was the threat of Saturday hoardes and a desire to stick to the plan that kept me going, and I parked up near Over Water, with a brief stop en route to search the edge of a car park, a ditch and hedgerow for a missing GPS receiver. Unsurprisingly, no luck there! 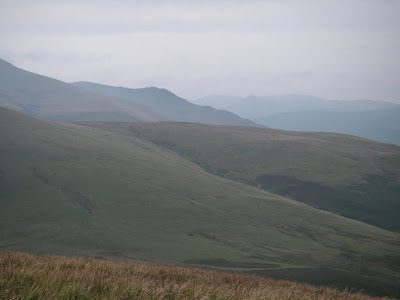 It wasn’t far into my route that I reconsidered my earlier doubts. Climbing the Lakeland fells is never a chore, and whilst this region may be more rolling than pointy, you can’t fail to be impressed by the grandeur of the views. Above is the view from the summit of Longlands Fell, looking towards the Ullock Pike and Long Side ridge route up to Skiddaw, and the Derwent fells almost lost in the haze. My route was designed to take me to Longlands Fell, Brae Fell, Great Sca Fell, Meal Fell, Great Cockup, and finally Binsey. It was a fairly gentle climb as far as Brae Fell, shown in the photograph below, seen on the way down from Longlands Fell. This gives a reasonable sense of the terrain up as far as Great Sca Fell, following which the gradients increase. 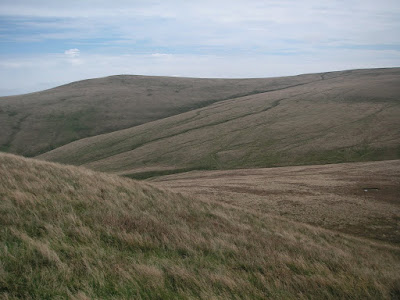 Great Sca Fell was the highest point on the route, at around 651m, and the drop from there down to Meal Fell is very steep. The path is easy enough, but I’d imagine the grassy surface, combined with the gradient, could leave it fairly slippery when wet! And following @stevenhorner’s advice about keeping an eye open for potential wild camps, took a photo down into a gully beside Brae Fell. Looked like a nicely raised patch of flat grass beside Swinburn Gill… I can probably find somewhere more exciting, but at least it’s another spot on the list. 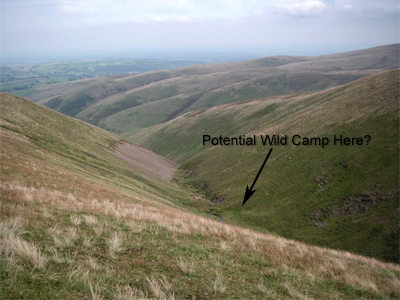 The view from Great Sca Fell was a good opportunity to pick out the route as far as Great Cockup. A short but very steep descent towards Meal Fell, via a gentle saddle, then down and back up a steep gully to regain the summit of Great Cockup. Bassenthwaite Lake is visible in the distance. The wind was becoming gusty (hence some of the blurred photos in the album I think) and you can just about pick out a man in a red waterproof taking a short break to enjoy the view about halfway down the path from Great Sca Fell. 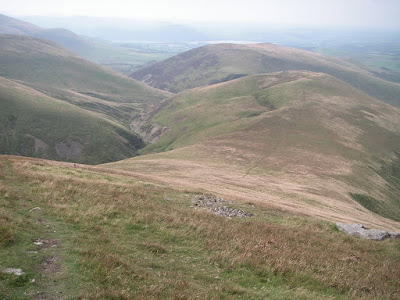 From the summit of Meal Fell, this is the view across the valley towards Binsey, with Over Water in the middle. Incidentally, if you are ever tempted to send an SMS text message from the summit of Binsey, take care if you are using predictive text. My phone tried to turn it into “Binsex”, which of course is something completely different! Along the road to Over Water is Overwater Hall Hotel. It looked nice, long private driveway, down which I saw a couple of very nice cars! Following a quick Google, it does indeed look very nice and some excellent feedback on their dining. It’s somewhat out of the way, but could be well worth a look for a posh weekend away. 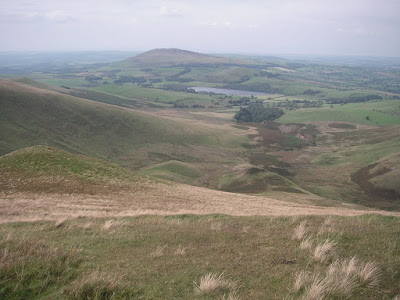 Back to the reality of tramping through the mud, Meal Fell drops away sharply to Trusmadoor col, before rising again to Great Cockup. Potentially this was the final Wainwright of my route, although I later added in the diversion up to Binsey. The north west of the Northern Fells seems to be laden with innuendo potential. Great Cockup, and the somewhat less intimidating Little Cockup, Willy Knott, and of course Binsex, to name but a few. I suppose you just have to resist all temptation for creating amusing double-entendres if you frequent this region and you happen to be the kind of person who enjoys Great Cockup… anyway, moving on! 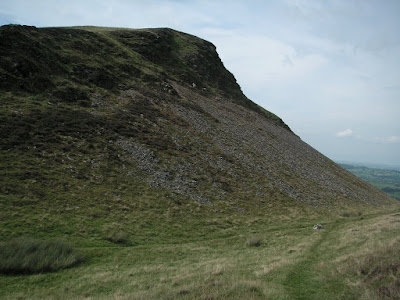 What an amazing name: Trusmadoor. Whatever it means! It’s the coll between Meal Fell and Great Cockup, and there’s an interesting path along the upper edge of the crags. Having reached the summit, I took another slight diversion to have a look at Brockle Crags. Very impressive from the path under Bakestall (my route down from Skiddaw, see this posting) but somewhat less impressive when you’re up close. It’s probably worth a look while you’re passing, and features some large quartz boulders and good views. This whole section of the walk provided great views down into the Dash Valley and over Bakestall and Skiddaw. 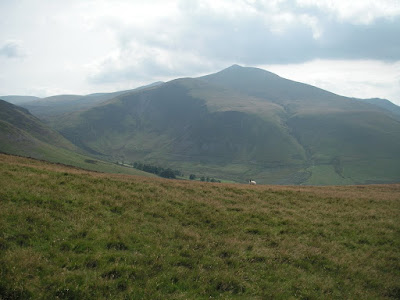 The path down to the valley was along a gravel farm track and the change in temperature from the fells to the valley was very dramatic. From Thinsulate beanie and Microfleece top, back to t-shirt and brimmed sun hat! In these very pleasant conditions, it was a good reminder why you should not go out into the hills under-prepared. 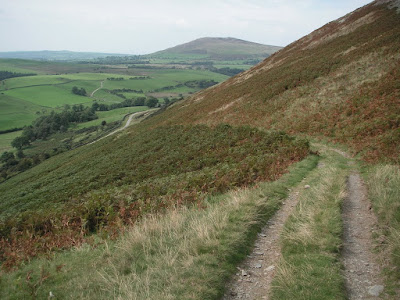 Binsey looked a long way off, as indeed it was, or so it felt when much of the latter stage of the route took me along paved road. But, it was only about 3pm, and it seemed well worth the slight detour to take in a fifth new Wainwright to the day’s walk. It was an easy route, much of which followed public footpaths across farmland. Along the way I passed an odd looking statue, which from a distance looked like a tall tree stump. Can’t find it on Google, but it’s not easy when you don’t know what search terms to use. Here it is anyway. Comments would be appreciated if you know who this guy is! I can only think it might be a half brother of William Wordsworth, or maybe Abraham Lincoln. 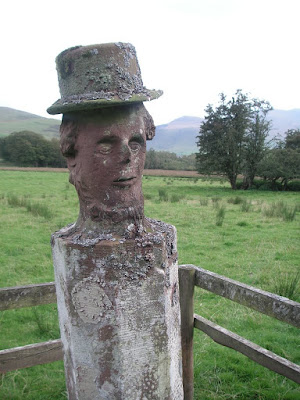 Binsey is somewhat out on it’s own. The views today, although very pleasant, were still a little hazy. I would suspect on a clear day there would be some great views from the Binsey summit. 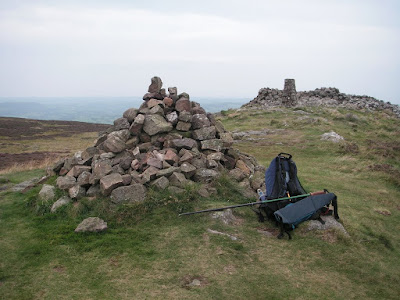 In summary, this was a slightly longer route than I’d initially anticipated, but takes in six Wainwrights from the Northern Fells. Unfortunately, I can only claim five, as I’d already counted Great Sca Fell in an earlier route. Total now stands at nineteen, leaving a further five to complete “Book 5”. Might have to make this two trips as the remaining fells are not well positioned to create a natural circular walk - or it becomes a long day if you do. Or, if I arm myself with a rucksack and stove, it would be considerably easier to complete them in a day and a bit… as always, watch this space!

“to those who travel alone, the solitary wanderers on the fells, who find contentment in the companionship of the mountains”
A. Wainwright 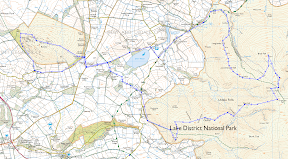