The weather was perfect for a day’s hiking on 13th July 2011, and my intention was to make a circuit starting at Seathwaite, with Great End at the southernmost point, and then returning via Glaramara and Bessyboot. A good plan I think, but I spent too long in Cust’s Gully and eventually had to cut the route short. More about that in the detail of the trip report below! 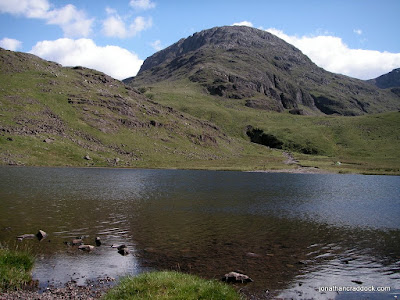 The negative aspect of all this, is that I climbed two - instead of the five Wainwrights I had planned for the route, but the path I eventually took up Great End is definitely a worthwhile bit of exploration, and almost infinitely preferable to the main ‘tourist’ path that is shown on the OS map, approaching the summit from the south.

Refer to Wainwright Book 4: The Southern Fells. This route added two more Wainwrights to the count, bringing the total up to 67.

Park along the Seathwaite road, which leads from the B5289 a couple of hundred metres south-east of Seatoller. I accidentally took the Stonethwaite road initially, and had to turn around - which is slightly irksome - so remember **SEA**thwaite. Conveniently, there is a convenience next to Seathwaite Farm, so hold your breath and use it if required. Follow the rocky path to Stockley Bridge. You need to cross the bridge, over Grains Gill, and take the path west, towards Greenhow Knott; it’s the path you’d take as if you were heading for Scafell via the Corridor Route. Go through the gate and look for the three prominent streams that cross the path. After the second stream, turn south onto a vague and grassy path. Head for Aaron Crags, climbing what Wainwright termed “route A”, up a steep grass gully. It’s actually “very” steep towards the top, probably slippery when wet, and I’d say not a good route for descent.

From the top of Aaron Crags, the going is considerably easier. Just follow the ridge to Seathwaite Fell, enjoying some superb views of Great Gable before Great End starts to come into view. The path is indistinct, but head for Sprinkling Tarn through undulating ground. Climbing Great End from the south was not a prospect that appealed to me, and so my plan was to follow the line known as The Band, then head into the north-west end of the crag, climbing Cust’s Gully to the summit. As it turned out, for a solo walker, I could see no safe route over the short pitch below the hanging stone of Cust’s. Discretion is the better part of valour, so I backed out of it and climbed a short rake to the west of Branch Gully. (The final pitch on Branch is harder and looked less safe than Cust’s.)

Sitting on the summit cairn of Great End, I cut short my original plan - which had been to descend via Allan Crags, Glaramara and Rosthwaite Fell - AKA Bessyboot. I think it would have been a good route, but it would have meant a late finish, so I descended to Esk Hause, and rather than follow Ruddy Gill back to the valley, I doubled back and took the path towards the foot of Great Gable, and sat in the sun beside Styhead Tarn. The path back to the car is easy, passing Taylorgill Force and rejoining the earlier path back to Stockley Bridge.

For anyone travelling into the Lakes from the north, Seathwaite is a great starting point for many routes. I imagine probably busy at weekends, but ample free parking along the roadside on the midweek days when I’ve visited. The WC next to the farm is also a welcome sight after a long drive! 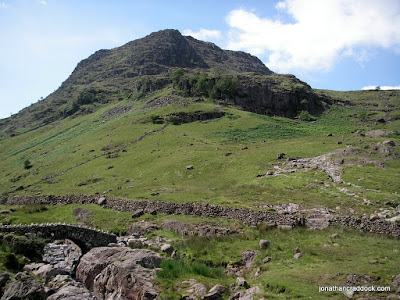 The path, heading south between the collection of farm buildings, is more like a dirt-track as far as Stockley Bridge, whereupon it splits into more typical, smaller paths. Take the path towards Styhead Tarn, but after crossing the wall below Black Waugh, look to your left and at the second stream, leave the main path and cross the gentle grassy slope directly towards Aaron Crags. I followed the route Wainwright termed Gully A. The illustration on “Seathwaite Fell pg 3” marks the boulder/shelter, which is a distinctive landmark along the route, but regardless of this, there’s no mistaking the gully.

“…the shapelier pyramid at the north end of the plateau, [with] a cairn at 1970’, buttressed by blistered rocks, is generally regarded as the summit of the fell although obviously it isn’t.” 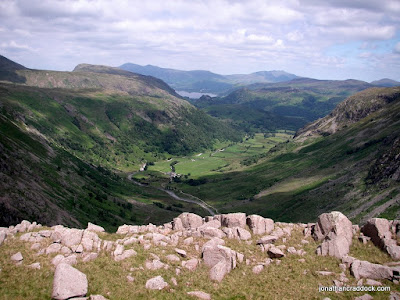 Ascent of Seathwaite Fell, via “Route A”

At a modest 601 metres, it’s overshadowed by higher fells on all sides, but still well worth a visit for the views and I think it’s a good approach route towards Sprinkling Tarn and Great End and affords excellent views back into the Seathwaite valley and back to Derwent Water.

Over Great Slack to The Band:

It’s an easy walk from the summit of Seathwaite Fell to Sprinkling Tarn over undulating terrain. Not much of a path, but no difficulty in route finding. Just after Sprinkling Tarn you’ll cross the main path from Esk Hause to Styhead Tarn. This is a very distinct path, well maintained, but on this route you simply cross over it, heading up the grassy slope below Great End and into a wide gully that appears to be known as The Band on the OS map. You cross a few rocks but it’s very easy going. 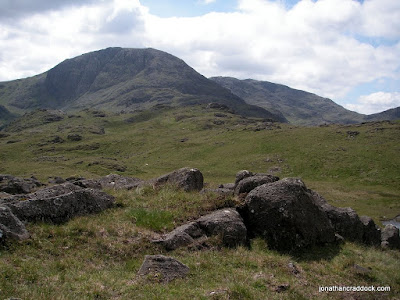 If you don’t want to attempt Cust’s Gully (or the alternative to the west) then simply follow this route to the western shoulder, near the top of Skew Gill, and head directly for the summit. Again, this is somewhat rocky, but very easy going in these conditions.

It was a bit of a disappointment to have to back out of this route, as for me, Cust’s Gully seemed like the perfect approach to the summit of Great End. The approach takes you into a dramatic spot that feels like it’s right up to the main crags, but with no real difficulty, and Cust’s itself would take you almost directly to the summit - again, without any difficulty, if it were not for a large chockstone, wedged halfway up the gully, creating a bit of an impasse.

“…written references to it are confined to rock-climbing literature, which dismiss the place as of little consequence although grudgingly conceding that there is one small and insignificant pitch…” 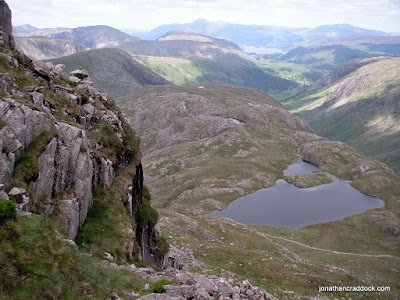 Looking back, on approach to Cust’s Gully

Wainwright concluded that Cust’s Gully was “no way for walkers”. But, rated as a grade 2 scramble, I thought it was worth a closer look. If anything, I think the grade might be slightly optimistic. At this point in July, I’d been climbing indoors for about 7 months, and had done some outdoor bouldering, but as a solo hiker I could see no safe route up the rock step below Cust’s hanging boulder. It’s a short pitch, a little over 3 metres probably, but the left side overhangs slightly and lower down the gully a couple of holds had already broken away in my hand from this wall. The right side looked more favourable, but even in these bone dry conditions it was covered in thick moss and running with water.

There are rocky ledges either side, which you could attempt to traverse up, but they looked insecure, and realistically you can’t risk a fall onto the debris and boulders that fill the gully below. The safest approach might have been to treat the obstacle as a short chimney and bridge up it, but again, any slip could have resulted in an awkward landing. Perhaps this is overcautious, but my view is that if walking solo, you need a more secure route than this gully can offer. 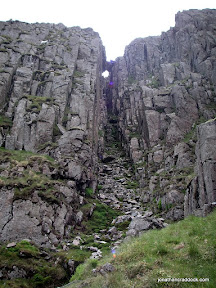 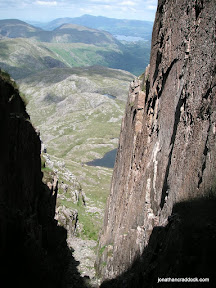 View into, and out of, Cust’s Gully

Having said all this, if you have time, it’s definitely a good bit of exploration. The first half of the gully is easy, just a couple of minor obstacles to navigate, and outside the gully it’s a simple grassy traverse, close into the crags. The views and sense of being close to the mountain make it a very worthwhile detour. 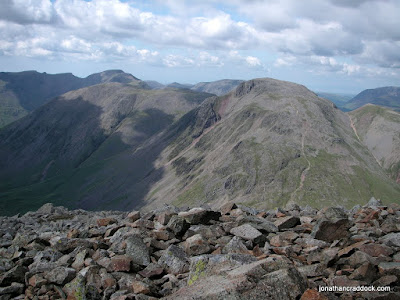 The pedestrian route (described on Great End pg 12 in the Wainwright Guide) is easily found slightly west of the Branch Gully, although I found it more grassy than the guide seemed to imply. It rejoins the main route of The Band and passes the exit of Cust’s on route to the summit.

I took what I suppose is the most popular path from the summit of Great End, down to Esk Hause, and my original plan had been to return to Seathwaite via Allen Crags, Glaramara and Bessyboot. Unfortunately I was running behind schedule at this point and took a shorter route down via Styhead Tarn. Following Grains Gill would have been quicker, but I wanted to get a closer look at Great Gable, which I had planned for my next outing. 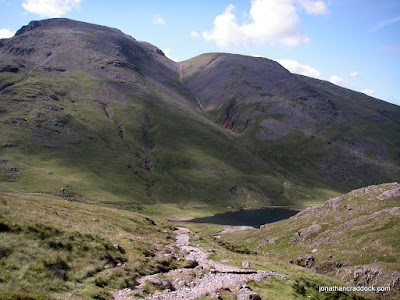 Styhead Tarn is a very pleasant spot. There was a single tent pitched on the southern side. I sat for a while on the northern side, chilling out with a granola bar before the easy walk back to the car!

In summary, I’d say this was an interesting route - tinged with some minor disappointment, but also benefits from getting well off the usual, well-trodden paths. Even a successful approach via Cust’s Gully would still have added significantly to the time, compared to taking the much easier route via The Band, so worth bearing that in mind when planning the day’s route. The ascent of Seathwaite Fell via “route A” is definitely worth trying, and I think probably its best approach to this summit from the Seathwaite side.

Other than that, I’m definitely of the opinion I need to wear lightweight cotton shorts in summer! I was walking in Montane Terra trousers, which I love in cooler conditions, but they are definitely not for me in this weather!