Haystacks felt like a significant milestone on my continued exploration of the Wainwright Fells, being the location where Betty Wainwright scattered her late husband’s ashes in 1991.

But, how did I get started on this Wainwright bagging quest? In any normal circumstances I would not draw a comparison between Julia Bradbury and David Blaine, but bear with me on this! I’ve always had an interest in magic; the sleight of hand variety, not the Harry Potter kind. Having dabbled and let the interest lie dormant for several years, seeing David Blaine in the late 90s was enough of an incentive to explore the field much further.

The real greats of card magic are not household names. Even some of the true masters of the 20th century such as Dai Vernon or Ed Marlo are probably unfamiliar names to most people. I would not expect many people to have any awareness of my own modern favourites, such as Darwin Ortiz, Lennart Green, or James Swain. David Blaine’s cardwork might seem trivial in comparison, but were it not for his early TV specials, I would probably never have embarked on my quest for a deeper understanding of the ways of the thaumaturge.

Similarly, an initial spark such as the “Walking the Wainwrights” series, can ignite something that goes well beyond the scope of a few episodes of a popular TV show. In an era where much of mass media has become overrun with reality trash, worthless tabloid celebrities and shill journalism, it’s certainly refreshing to discover something that can provide meaningful stimulation. Something that can entice the viewer from their sofa, to explore well beyond the original selection of popular fells.

Much to my amazement, the forecast from Accuweather and the Mountain Weather Information Service indicated Wednesday 3rd November would be a brief window of pleasant weather surrounded by Noah-esque monsoons. Apart from a a bit of low cloud (which only hung around for an hour or so) they were absolutely right. 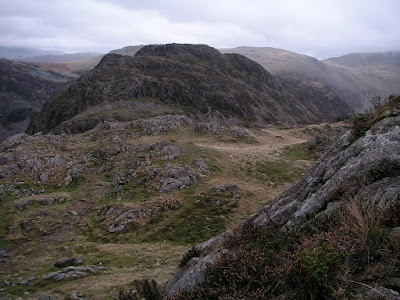 Park at the Gatesgarth carpark at the foot of Fleetwith Edge. This is a 3 pay and display. If you object to the fee, park further up the Honister Pass. There are several laybys within a couple of km, but you might consider 3 is worth it for the convenient location and the presence of the snack van! Follow the path along the southern side of Buttermere to Burtness Wood. At the west corner of Buttermere, turn up a steep (very well maintained) path which ultimately brings you alongside Sourmilk Gill and up to Bleaberry Tarn. From here, it’s another short and steep climb to the summit of Red Pike. This is Wainwright one, and the highest point of the day’s route. It’s the start of a fine ridge walk that takes you over High Stile, High Crag, Seat, and Haystacks. My original plan was to continue to Fleetwith Pike and descend Fleetwith Edge. Unfortunately, a late start and fading light led me to divert back down to Buttermere before Little Round How, following the course of Warnscale Beck. This turned out to be a good decision, not least because this turned out to be an excellent mountain track, clinging to the side of Fleetwith Pike and affording fantastic views over the waterfalls and up to the craggy ridge between Haystacks and High Crag. 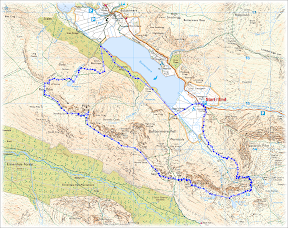 Will open in Picasa…

Just a brief recommendation for the B5289 out of Keswick. Not a great road to get stuck behind someone, I’d imagine, but on this particular Wednesday it was a great route into the mountains. Spectacular views too. I think a very useful road to keep in mind if travelling from the north, as it opens up a wealth of possible routes from several easy to reach laybys and car parks. For me, this may turn out to be the starting point for Great Gable, or Scafell, and many more, which would otherwise be a complete pain to drive to.

This represents the low level walk-in to the beginning of the ‘route proper’. Follow the bridleway along the south-west shore of Buttermere. The path forks just before Butness Wood, the upper path taking a route through the trees, the lower path following the shoreline. I took the upper path, but both ultimately bring you to the same point; the lower path would have been easier, and less like walking along a river! At the south-west tip of the lake, the path splits again, and you turn sharply south up a steep, well maintained path. So steep and well maintained that in fact, it’s more of a staircase than a path. Add a few windchimes and it would not be a surprise to find yourself at a Buddhist monastery by the time you reach the top! 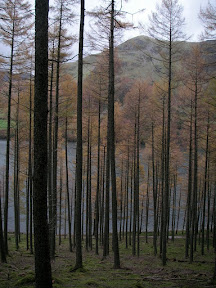 Eventually you exit the trees onto the side of the fell, and it becomes a more typical mountain path. This is a very enjoyable section of the walk, with great views down to Buttermere, and both directions along the valley. 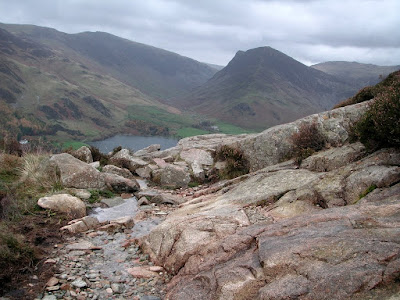 There is no difficulty in navigation on any stage of this route. The track out of Burtness Wood turns west and takes you to Sourmilk Gill. I stopped for a rest here. It’s a beautiful fast flowing stream, with very nice waterfalls, through a deep rocky gully. 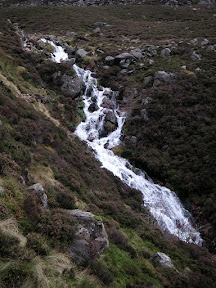 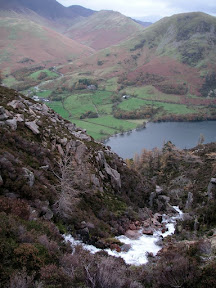 It’s a steep climb to this point, but now there’s an easy stroll across to Bleaberry Tarn, immediately followed by another steep ascent to the summit of Red Pike. The path also begins to deteriorate at this point, although it remains very easy to follow.

Just as I reached the summit, the cloud came down - perfect timing! There was a good view of the summit shelter, but beyond the flat-topped summit, there was a wall of whiteness. Fortunately, there was a feeling of brightness and after about ten minutes, the sky began to clear. 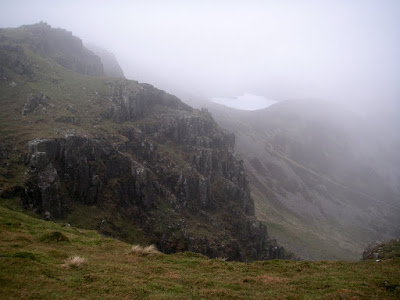 Between Red Pike and High Stile, things were looking good and I started to get some decent views back towards Red Pike and down into the valley. From here, the weather steadily improved.

From Red Pike to High Stile and High Crag:

From the summit of Red Pike begins something of a classic Lakeland ridge route, ultimately leading you to Haystacks and beyond. Nice easy walking, fantastic views, and a great sense of being in the mountains. Keep in mind that while this ridge feels like more of a rounded shoulder than a rocky knife-edge, don’t forget that the north-eastern flank of these fells has several precipitous drops! 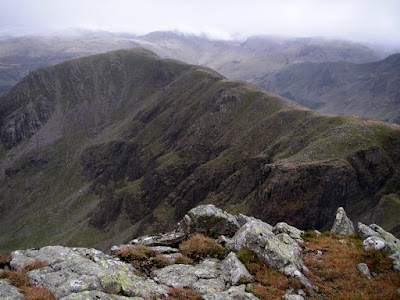 The view above is from High Stile, looking towards High Crag. It looks like it’s all down hill from here, and mostly that’s true, but there’s a fair bit of a depression before you climb back up to Haystacks.

It’s also along this section that you get some of the best views of Pillar and the Ennerdale valley. Below left is Pillar, right - the view towards High Stile on route to High Crag. 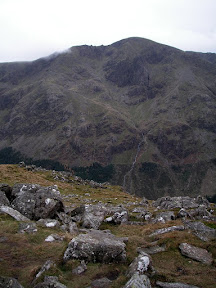 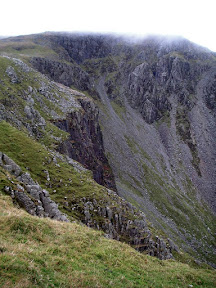 The final fell (by this time I’d accepted it was going to be too late to take in Fleetwith Pike) was my highlight of the day. Perhaps somewhat lowly in stature, it makes up for this in appearance and location. 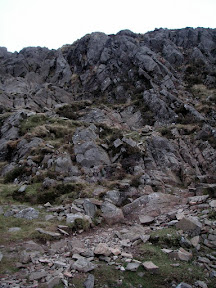 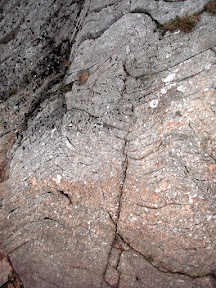 On the left is part of the path/scramble to the summit of Haystacks. There’s an easier path around the southern side, but it didn’t look much fun. This route also gets you closer to some of Haystacks’ amazing rock formations. To the right is a close up of folds in the volcanic rock just below the summit. The folded and warped layers of rock give you some small sense of the kind of upheaval that originally created these mountains.

The route I chose for my early exit follows a course along the northern side of Warnscale Beck. After days of rain, the river crossing I chose was easy enough, and led to a narrow track that clings to the side of Fleetwith Pike as it slowly descends to Buttermere. Gradually this becomes a typical farm track, and it’s an easy walk out to the car park. I’d give this as another justification for the 3 fee at the Gatesgarth pay and display. 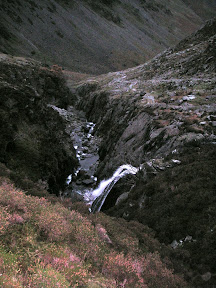 The picture above shows a very attractive, albeit nameless waterfall, that tumbles over wide slabs of rock into a deep gully. It would be a nice place to explore, but sadly, it was getting late!

This is a route that I can highly recommend. At 10 miles, it felt like an ideal day-walk, about five and a half hours. I met about half a dozen people/couples on the route, but I’d suspect this is an area that could become pretty busy at a weekend.

In conclusion, I do slightly begrudge paying for a carpark that basically consists of a patch of gravel, but location is everything and the Gatesgarth carpark is in the perfect spot for this route. Also, it gets dark quickly! A change plans mid-route is sometimes absolutely the right decision, and this route was a prime example of this. This is a fabulous area of lakeland and I can see myself returning often.