I think I was walking this popular route in reverse, or at least, most people seemed to be going the other way. I'm pretty sure I took the better direction for the first half of the route, and I think the latter half would have been equally good in either direction. After my experiences on the Grisedale Horseshoe, starting too late and finishing in darkness, I chose a shorter route and was underway before 10am.

I have no hesitation recommending this route as an easy day-walk, just over 10 miles (17km) and 5750 feet of ascent (1752m). My GPS shows I was moving for about four hours. If planning a few stops for refreshment and photographs along the way, allowing about six hours should be plenty of time. The terrain is excellent, great views, well marked paths, and takes you to 7 Wainwrights. The only potential downside could be it's popularity, if you don't like company on the fells, but considering it was a Saturday the crowds were bearable! Wainwright count now stands at 38 bagged, and 176 to go! 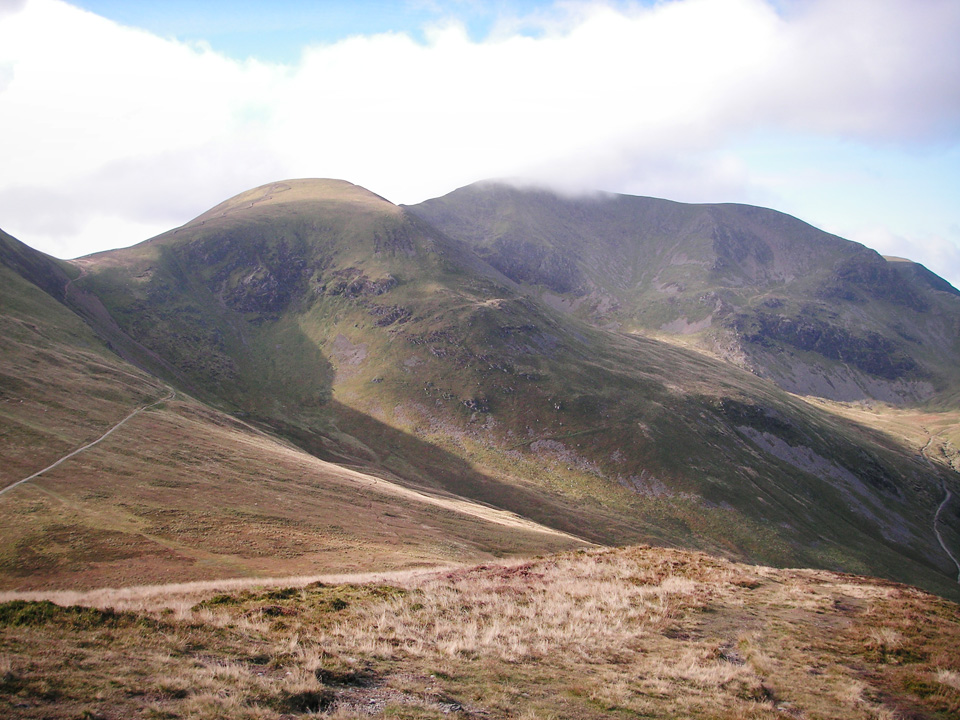 View towards Crag Hill at the head of the Coledale valley.

Park in or near Braithwaite. I approached from Keswick and drove through Braithwaite village onto the Whinlatter Pass. A mix of layby and car-parking is available, and at about 9:30 on a Saturday, I found spaces only a few hundred yards out of the village. Head for Barrow. A couple of useful checkpoints to keep you on track through the village are a small stone bridge with a sign for Coledale Youth Centre, a white painted chapel (head left near there) and bear southwards, passing the Coledale Inn on your right. Shortly after the Coledale Inn, a path down through some woods gets you onto the path for Barrow. From here the route is obvious, taking the following fells in sequence: Barrow, Outerside, Sail, Crag Hill, Wandope, Hopegill Head and Grisedale Pike, but the following notes may be helpful:

The path up Outerside is straight up the north-east ridge. It's not immediately visible when approaching from the south, but it's a clear path and you'll know when you've reached it. Secondly, the OS map shows a couple of paths up to Sail, with the more northerly one appearing to cut across a craggy scree slope. This path does not exist, so you probably want to get up to the top of the ridge, then the path to the summit is clear. Finally, the route is circular and can be taken in either direction, but for me, I think I'd have found it a long trudge up to Grisedale Pike from the east, and I'd probably stick to the sequence above if I was repeating the walk.

It's saying something - that the most complex piece of navigation throughout the entire day was getting through Braithwaite village onto the path to Barrow! But really, this says even more about how easy it is to follow the rest of the route.

The walk up Barrow offers some fantastic views back to the Northern Fells, and particularly towards Derwent Water. In the image on the left below, the green fields looked amazing. Catbells would be off to the right. 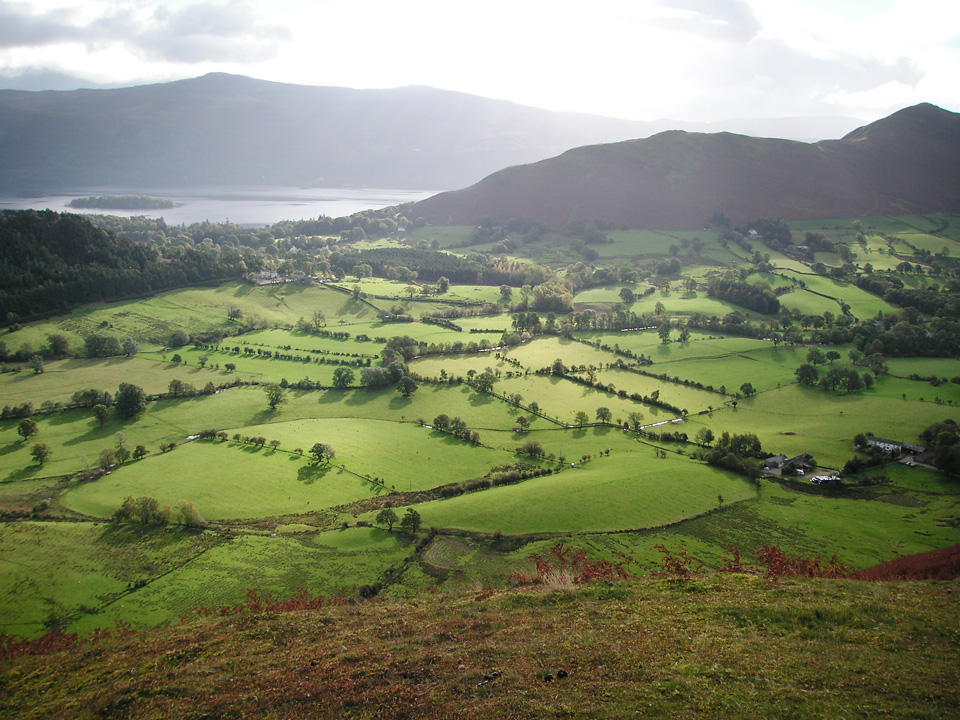 From Barrow you drop down the side of Stile End on a path that would ultimately take you to Sail. But, around Low Moss, you need to head up to the north-west ridge of Outerside. There's not much of a path to this point, just follow the sheep tracks through the bracken and heather. The Outerside path remains hidden by deep heather until you're almost on top of it, whereupon it becomes a clear track to the summit. 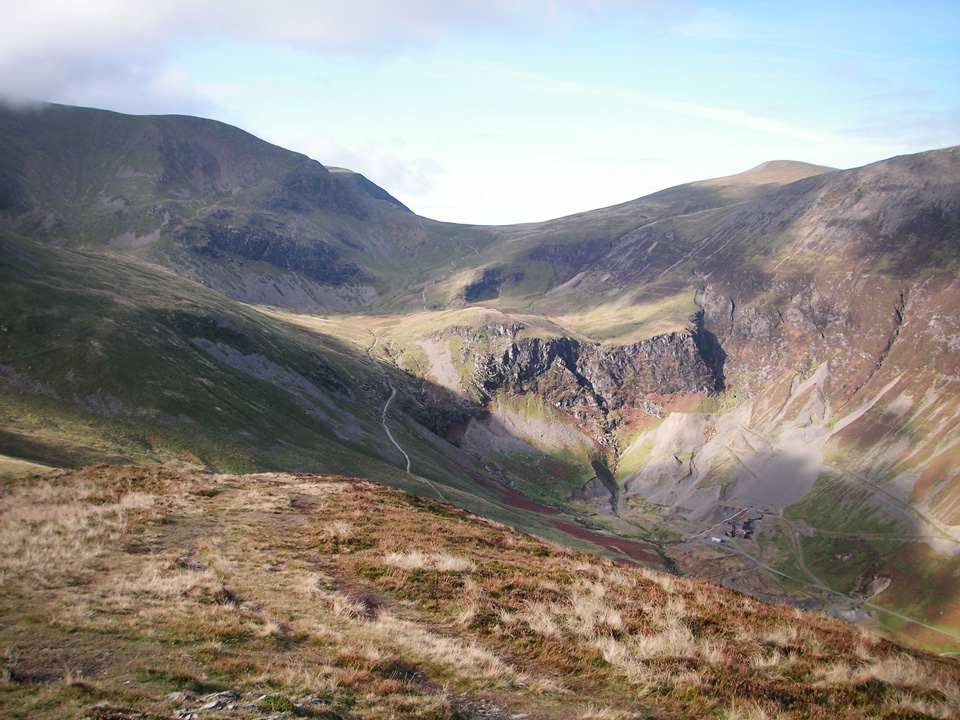 View from Outerside to head of Coledale.

Outerside is rather flat at the top, and the approach from the north is definitely more interesting than the south, which is just a gentle grass slope. The views are excellent, with the head of the Coledale valley to the west, and the view south dominated by Causey Pike. The image above is the view towards Force Crag, with Eel Crag to the upper left and Hopegill Head just visible in the upper right.

The path to Sail

The ascent of Sail breaks into two logical stages. First, the climb to the col between Sail and Scar Crags which takes you up a steep stony path. Then there's the climb up a somewhat artificial, but strangely impressive, zig-zag path to the summit. 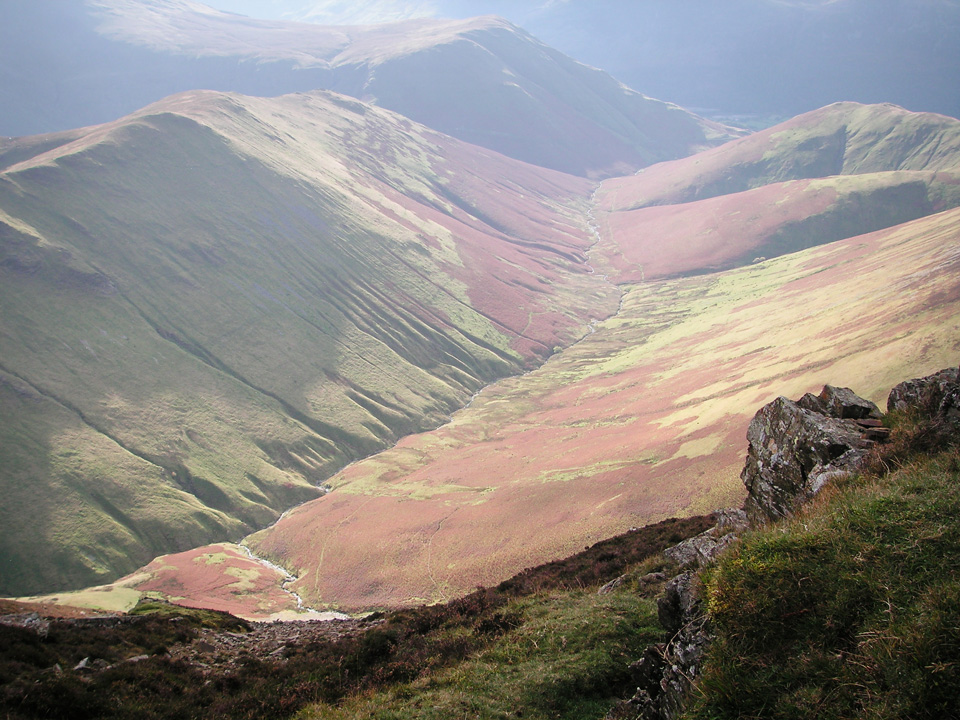 From the summit of sail, there is a short walk along a wide rocky ridge to Crag Hill (Eel Crag). Again, I was pleased I'd chosen to be approaching from this direction.

As the name Eel Crag suggests, steep rocky faces are presented to the northerly sides, but the summit is rounded and slopes gently down to the south. My original plan was to head from here straight to Hopegill Head, but I was well ahead of schedule and decided to have a short walk over to Wandhope.

This route takes you along the edge of a broad, slightly sloping plateau. On my way, I saw someone climbing the north-east ridge of Wandope. It looked very steep, but nevertheless he arrived safely at the summit! I'd guess that's probably about the most impressive route to the summit of Wandhope. 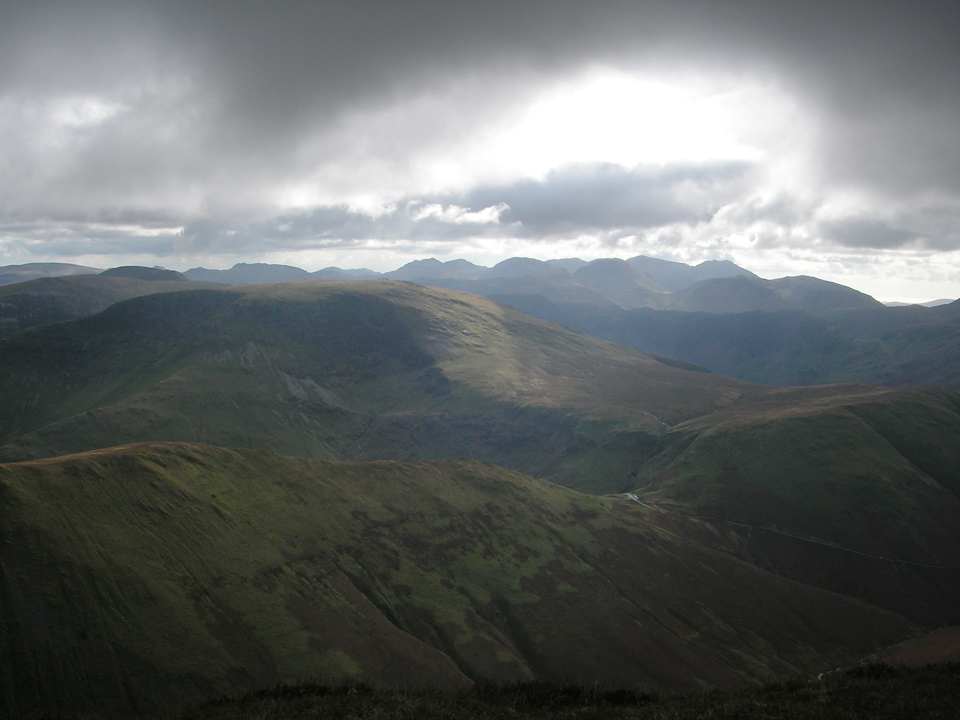 Stunning panorama from the summit of Wandhope.

Wandhope doesn't look like much when approached from the south, but it was a very pleasant place to stop. Spent a while sat beside the summit cairn enjoying the views.

The path to Hopegill Head takes you below the northern side of Grasmoor. I'd decided to save this for another day, and followed the path down to Coledale Hause. It's another very well maintained path, following the upper course of Liza Beck. 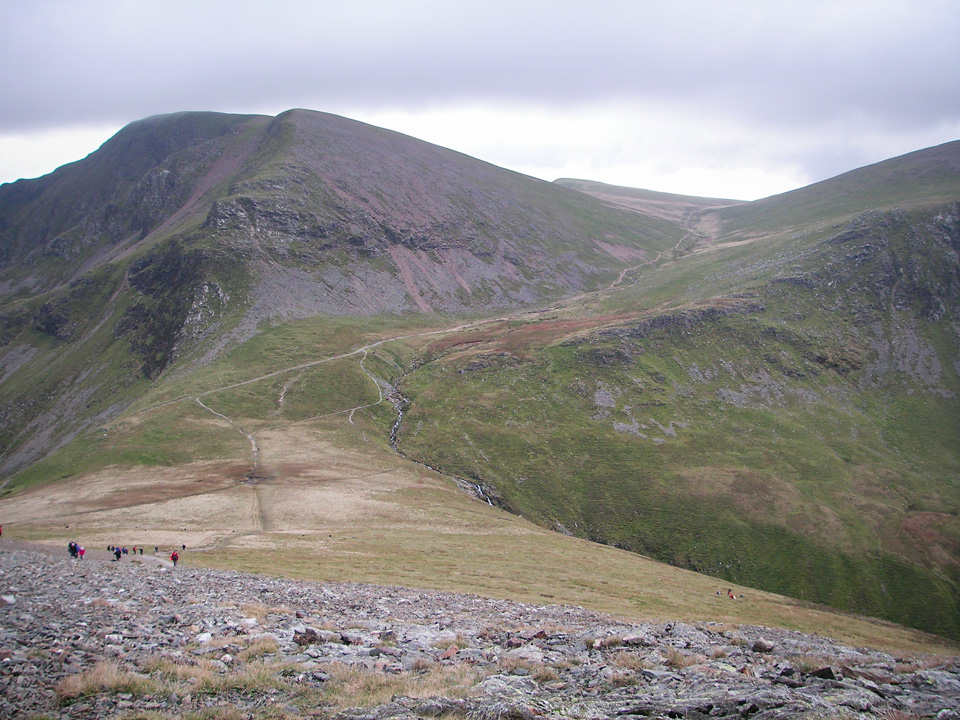 Above you see the view from the ascent of Hopegill Head, looking back towards Crag Hill (Eel Crag) on the left, and the summit of Wandhope is just visible towards the centre of the horizon. Grasmoor is to the right. You can see more than a dozen people back down the path, and there were as many again at the summit. Shocking, when I'd been used to enjoying mid-week solitude! But, can't complain for a Saturday, I suppose. 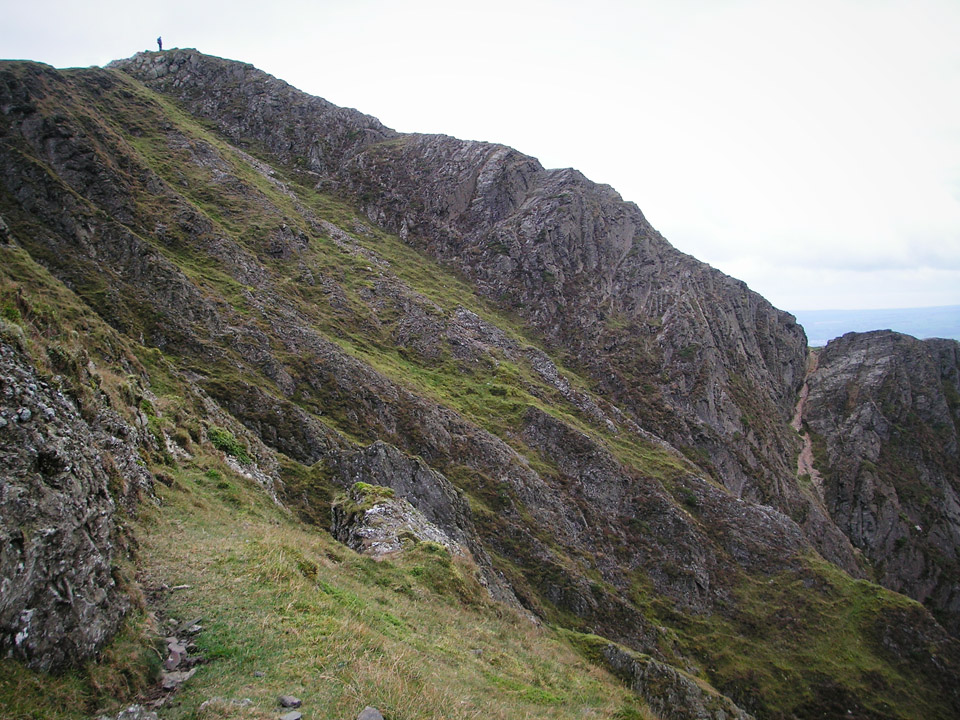 Cliffs below Hopegill Head, looking to the west.

Hopegill Head is an impressive, rocky summit, all the more so if seen from the western side, with steep slopes, broken cliffs and gullies down to Hobcarton. The ridge, above left is looking south to Whiteside - with my back to Grisedale Pike. 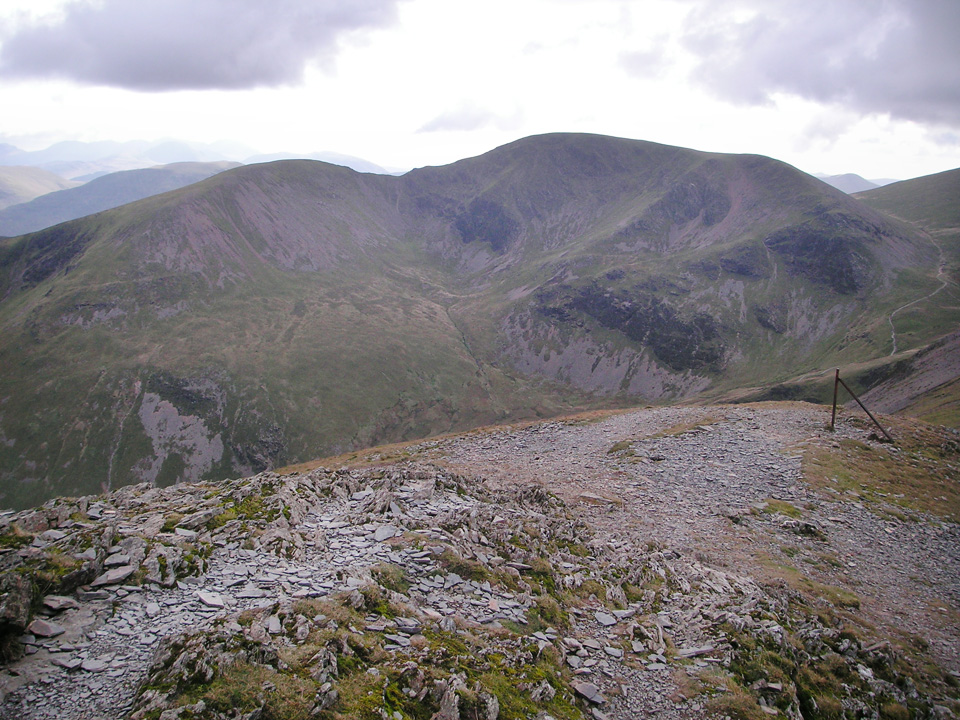 From Grisedale Pike towards Crag Hill.

Sadly, it also marked my final summit, before the long descent to Braithwaite.

I can highly recommend the Coledale Round. It appears to be a popular route, and given a choice, I'd have probably walked it mid-week, but it's not excessively busy. It's also a fairly easy route. Just a couple of steep sections, on the climb up to Crag Hill, and the path to Hopegill Head which is basically up a steep scree path, a little slippy in places. Similarly, the descent from Grisedale Pike is occasionally quite steep, but again - there's no actual difficulty in any of these sections. 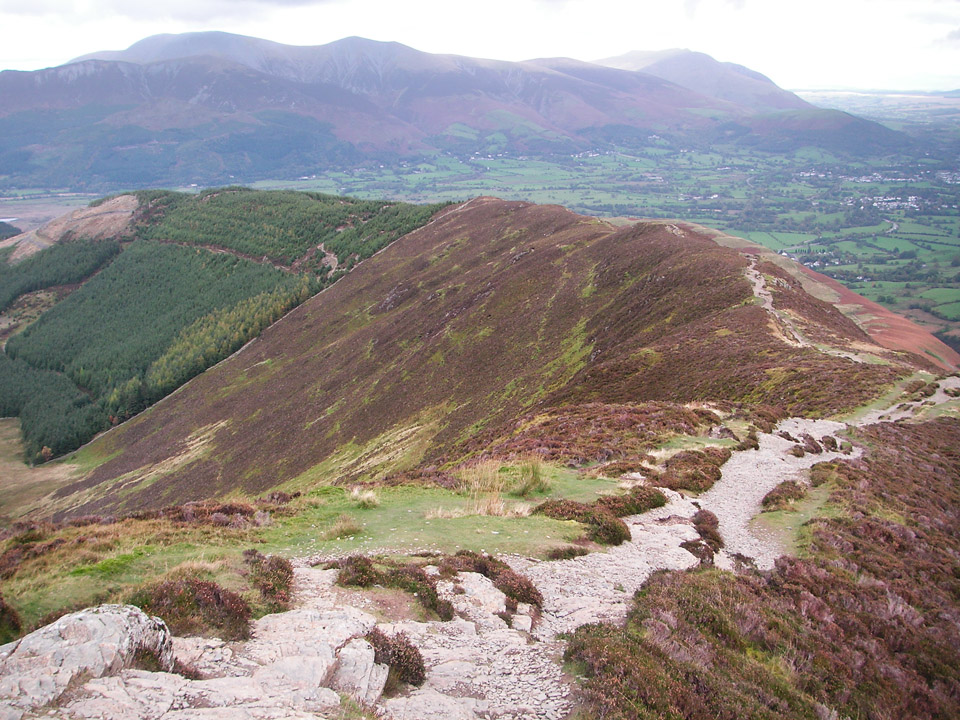 From the descent of Grisedale Pike, looking towards the Northern Fells.

Things I learned? I'd seriously consider walking the route in the direction described above, I think you ascend Barrow, Outerside, Sail and Crag Hill from their better sides. Wandhope to Grisedale Pike is probably 50/50 either way. If following in the opposite direction, I'd probably follow the ridge from Sail to Causey Pike, instead of dropping down towards Barrow. There seems to be ample parking along the Whinlatter Pass, just outside Braithwaite, although I guess it might be a different story in the middle of summer.