Great Gable via Base Brown

A 12km route to Great Gable via Base Brown. (Wainwright Book 7: The Western Fells)

This route added three more Wainwrights to my bagging-count, bringing the total up to 70, and tantalizingly close to 1/3 of the way there!

Park along the Seathwaite road, which leads from the B5289 a couple of hundred metres south-east of Seatoller. Take the track that leads under an arch at Seathwaite Farm, and follow the track up Sourmilk Gill. (I assumed the path went around the side of the building, which is also a path, but takes a longer detour round a field, before rejoining the actually path - so look for the archway opening to the path.) Follow Sourmilk Gill until you come to a plateau; great views of Raven Crag - so pencil that in for a future bit of climbing! Leave the main path and head south-east for Hanging Stone. After a huge boulder, you pick up a proper path again, and follow it around the southern side of the Hanging Stone and to the summit of Base Brown. From here, you quickly meet up with the main Green Gable path, and follow this across Windy Gap to Great Gable. The route here is easy, but takes you across some loose rocks and scree, so be aware of anyone above or below you.

Take care with your direction off Great Gable, there are some sides you probably don't want to casually walk off. The path to Styhead Tarn leaves the summit due east, then turns south-east after about 200 metres. Paths are unclear at the summit as it's predominantly covered in rocks, but I presume this path to Sty Head is one of the most popular routes, and it's well maintained and unmissable once you get to it. From the tarn, follow Styhead Gill back to Stockley Bridge and then turn north on the farm track back to Seathwaite. 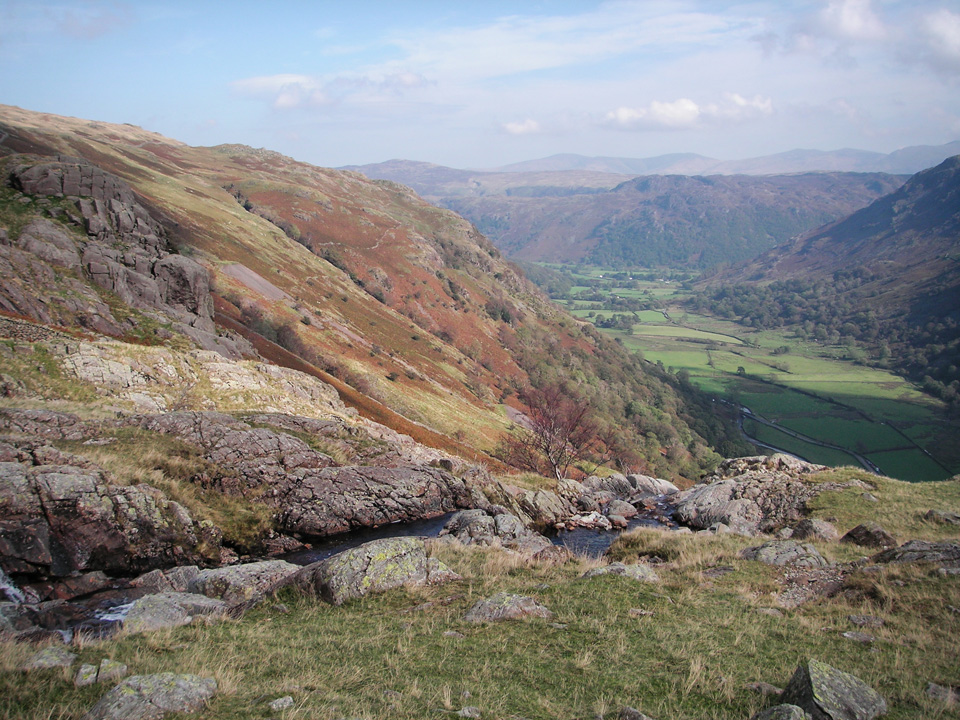 View towards Seathwaite from the ascent of Base Brown.

"Great Gable is a favourite of all fell walkers, and first favourite with many."

Car-park to Base Brown

Leave the B2589 from Keswick at the Seatoller Bridge and follow the road down to Seathwaite Farm; there is ample free parking along the roadside. 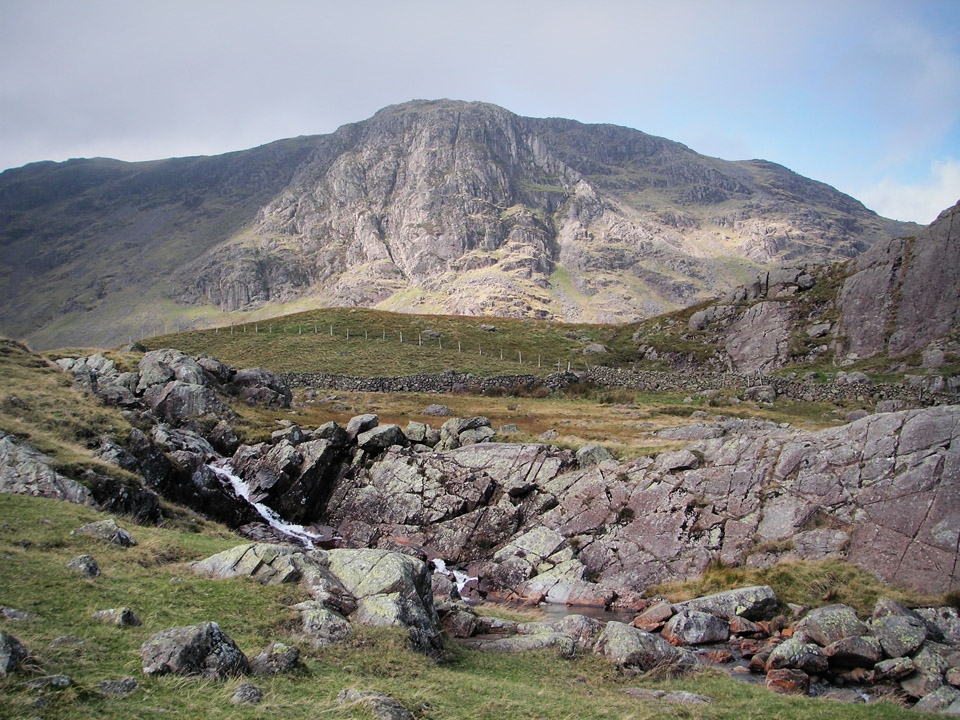 A good tip if following this route is to note the path to Sourmilk Gill starts in the middle of the farm buildings, under a small arch. The more obvious assumption, that the path goes around the outside, does get you back onto the same path eventually, but forms a bit of a pointless detour around a field.

There is less than 1km of steep ascent before you arrive at Gillercomb, a level area, which from O-Level geography I guess would probably be termed a hanging valley. Appropriately enough, leave the main path here and head for Hanging Stone, on the ascent to Base Brown via its north-east ridge. There is no clear path at first, just grass initially, and then a rocky area to cross.

"Base Brown marks the end of roads and farmsteads, of woods and green pastures, as one proceeds into the upper recesses of Borrowdale. It marks the beginning of wilderness and desolation." 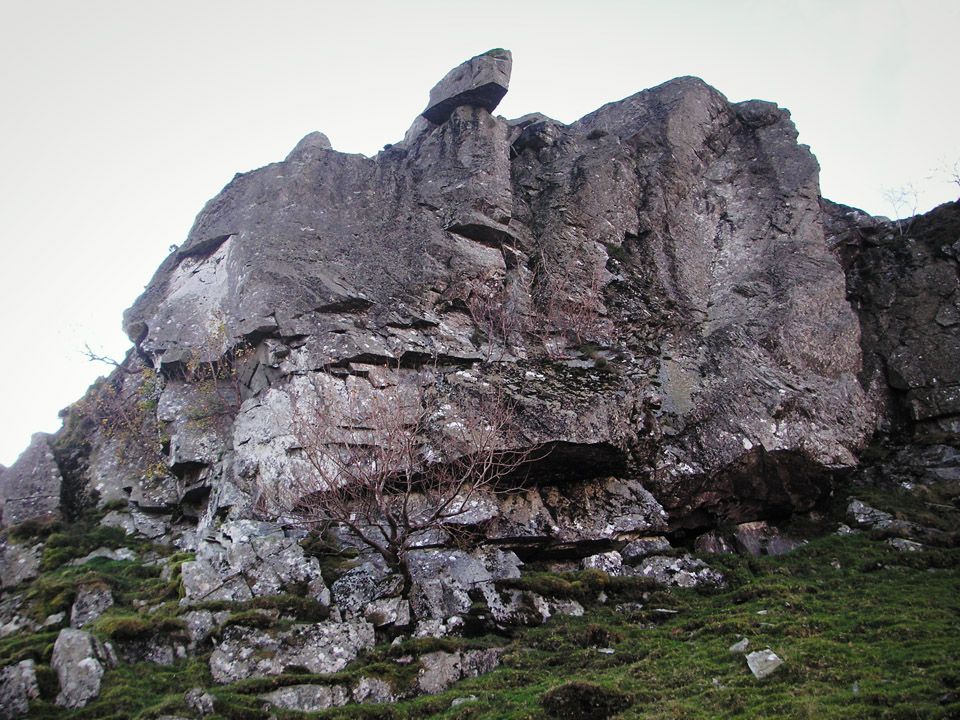 The "Hanging Stone" on ascent to Base Brown.

There's a huge boulder below the crags, which is a good landmark, as I found there's a clear path shortly after; seen in photo below-left. It's a good path, but remember there are steep crags to your left, so stay on the path and follow it around. Standing on the aforementioned boulder is also a good viewpoint back towards Seathwaite. 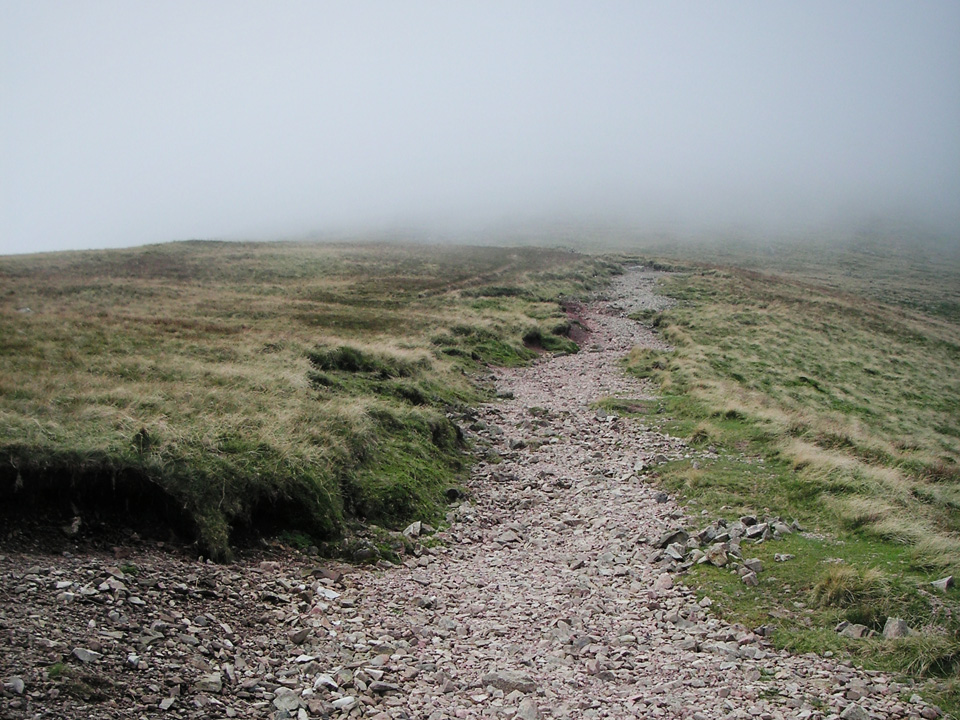 Once you're at the summit of Base Brown, the path becomes considerably easier across the col known as Blackmoor Pols and it's an easy walk up to the summit of Green Gable.

"It might be thought that the summit (of Green Gable) had been expressly constructed for observing the northern crags of Great Gable, so convenient s platform it is for this purpose."

I don't think I was seeing Green Gable on one of it's better days. The photo below shows a brief glimpse through the cloud, but for most of the time there was nothing to be seen in any direction, and I'm sure it would normally command some superb views. 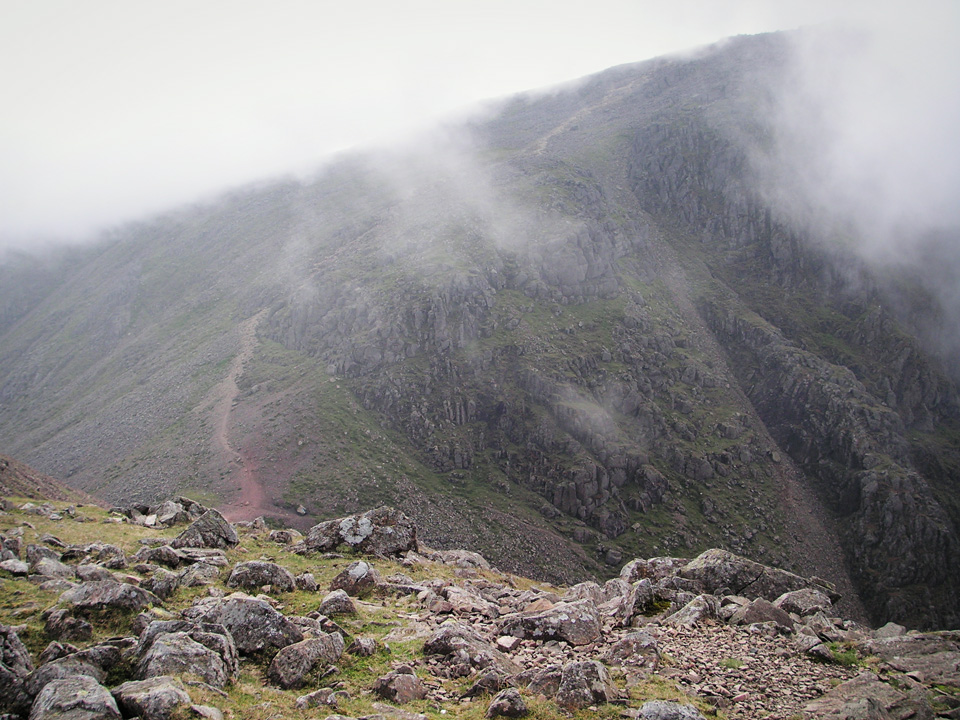 Windy Gap is appropriately named, being both a gap, and windy.

It's fairly steep on both sides, and seemed particularly loose underfoot on the Great Gable side, so care should be taken not to dislodge rocks onto anyone who might be below. The gaps in the cloud appeared to be getting more frequent as I began the climb up from Windy Gap, and it was definitely feeling brighter. 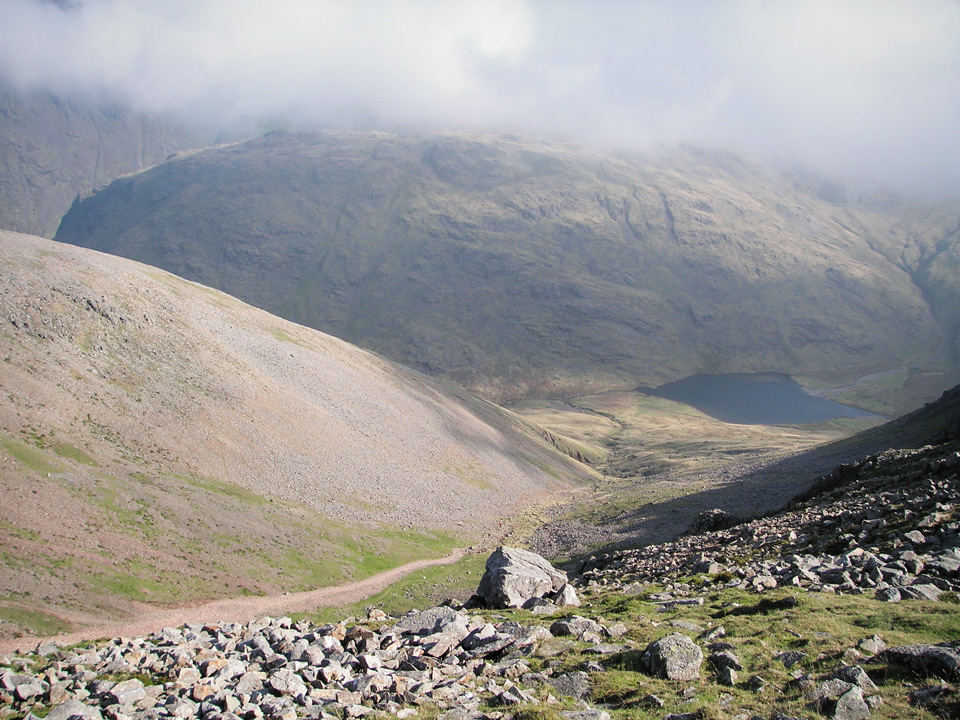 Gable Crag, shown in the photo above-right is a popular climbing area. Saw some jackets and gear at the base of the cliff, although couldn't actually see where they were climbing. Didn't venture around to have a look - but the route Wainwright describes as the "Gable Girdle" sounds like something well worth returning to. 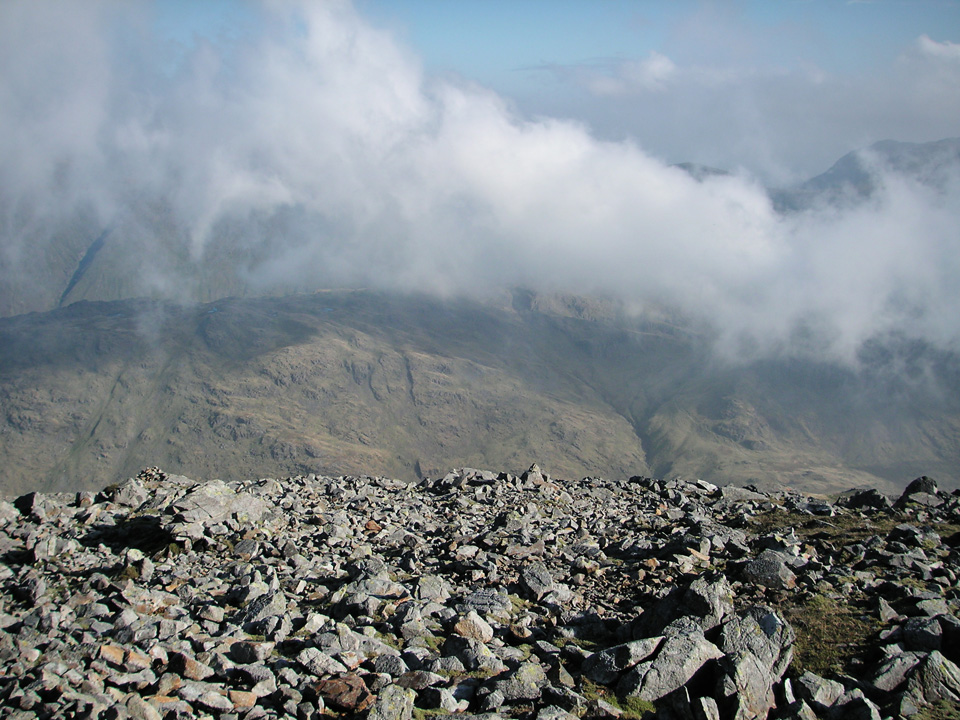 It would have been easy to be disappointed by the cloudy conditions, but sitting on the summit, watching the clouds swirling around the Scafells, Lingmell and Great End, it was a remarkable sight - glimpses here and there, before another curtain of white descended to hide the view. Another good reason not to be discouraged by English weather!

"Erected in 1876 by two brothers of the name Westmoreland, (Westmoreland Cairn) marks what they considered to be the finest mountain viewpoint in the district."

The path I took down Great Gable I presume must be the most popular route, although it might also be the least interesting. However, it's a good quality path and leads conveniently down to the top of the pass at Sty Head. 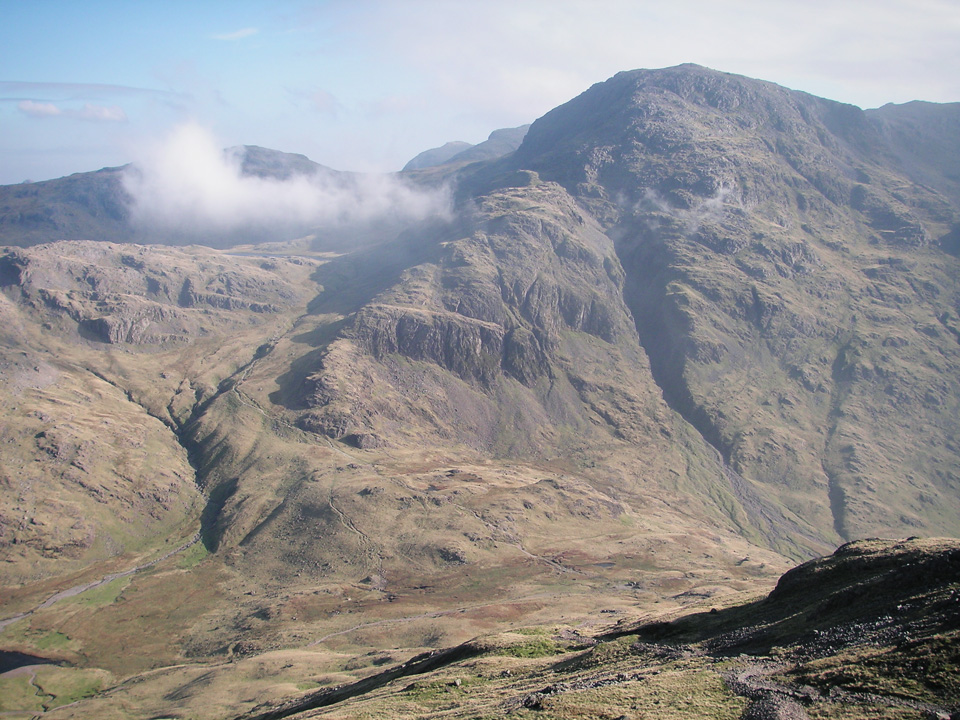 From there, I rejoined the path I'd descended on my previous trip: Great End, via Seathwaite Fell. From Styhead Tarn it follows the path of Styhead Gill, passing Taylorgill Force and rejoining the Seathwaite track near Stockley Bridge. It's a pleasant descent in the shadow of the surrounding fells, with Base Brown to the west, Glaramara to the East, and Seathwaite Fell looking down from the head of the valley.

I'd be happy to recommend this route. The ascent of Base Brown via Sourmilk Gill is steep, but rewarded with some excellent views, and within those first 3km you're already up at about 650m. The short ascent between Green Gable and Great Gable probably doesn't really do justice to either - and both deserve more exploration in future. In particular, I'd like to return to the Gable Girdle, described on pages 9 and 10 of Wainwrights western fells. This link to Pace the Peaks features some photos of that route. 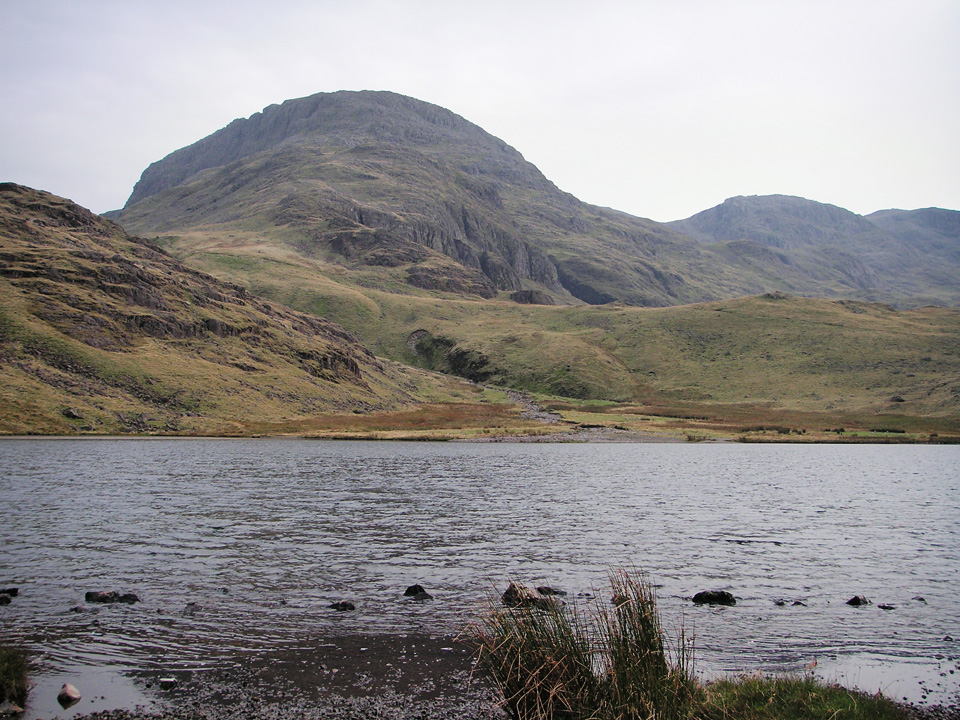 In summary, a very enjoyable day out, and a short but worthwhile route.